Meet Saravanan Hari – the man who paints his whole body in yellow and caught the attention of the television and print cameras.

The Indian Premier League (IPL) is all set to begin on April 9 and the first match is happening in the southern part of the country – Chennai. However, the Yellow Army fans won’t be able to witness the spectacular due to two reasons – one being the COVID-19 restrictions and the second, no team is playing at their own home venue.

However, seeing CSK’s 2020 edition performance, it could be said that their’s ‘Dad’s Army’ strategy was not quite working in their favour. In the recent IPL Auction, they did get in a few names to help fill the gap of players who retired from the game or whose contracts were over.

Keeping the 13th edition fresh in mind and looking for a new start in the 2021 season, Saravanan Hari, in an interview with DNA said that, “PL is back in Indian and CSK has always been favourites and with Suresh Raina back in the squad with new additions, I am sure things will work in our favour

With players all in the bio-bubble and CSK’s preparations going strong, Saravanan Hari said that he will surely miss the atmosphere at the Chepauk stadium. “The people of Tamil Nadu are known for celebrating and supporting their idols. We are always welcoming and are used to giving the people (we love) titles. Thala and Chinna Thala are few examples of our welcoming nature. Cricket runs in our blood and the atmosphere at the Chepauk is always fun and insists on a lot of singing, dancing, cheering at the top of our lungs and a lot of whistling”.

But this fan has seen all the shades, highs and lows of CSK. “The CSK supporters have been through this situation before. The gates of Chepauk were closed for CSK fans for two years, but we didn’t lose hope and supported our team and Dhoni Anna through the dark phase. So, I think it’s business as usual for us now. We enjoyed IPL thoroughly last year from our home and with the given situation, I am requesting everyone to cheer for their teams from the comfort of their homes. I am praying and hoping to soon watch Dhoni LIVE at Chepauk hitting 6s – all fans are waiting for that, and we hope it comes soon”.

It’s also that time of the year for Saravanan when he’s always busy as his Twitter handle goes, a “superfan” – especially of MS Dhoni. His love for the ‘Thala’ grew since the man had made his debut in 2004. Be it Dhoni’s hairstyle, his swag or his on-field performance, everything was just enough for Saravanan to not just continue to remain a fan. Meet Saravanan Hari

“MS Dhoni has been an integral part of my life. He deserves all the love in the world, as he won us a World Cup and has honoured the state of Tamil Nadu with three IPL trophies. My love for Thala is appreciated by everyone. I even get exemption from work, whenever IPL was around the corner”.

Just like many Chennaiites, Saravanan love for the local franchise just grew double with Dhoni’s inclusion. Painting his whole body in yellow, he had caught the attention of the television and print cameras, and his life has changed ever since.

“With time everything changes, so have my methods. Earlier on, I used to apply paint to my body. It took around 4 hours to complete the painting process. I used to paint 3 coats on my body and each coat took around 30 mins and the drying process took 15 mins. When I realised there is an alternative to coating paint on my body, I started wearing a yellow body con suit. Now I only paint my face”.

But what makes Saravanan special?

“Most people think that only my yellow bodycon suit is what makes me a superfan. But there’s more to it – the way I have been supporting CSK tirelessly for all these years. I think I became a CSK superfan when I stepped inside Chepauk with yellow colour painted on my body. That incident caught the attention of the broadcaster’s cameramen and soon I started getting calls from the media. I did not do it for the fame, I was noticed because of the dedication and love I have had for the team. Meet Saravanan Hari

“The pandemic had a very bad impact on everyone, including me, but I didn’t lose hope. I prayed for IPL to come back in 2020 and it did come back. I am hoping and praying that CSK wins this year. According to me, when a person eats, sleeps and dreams about a team/ person, that’s what makes him a superfan. 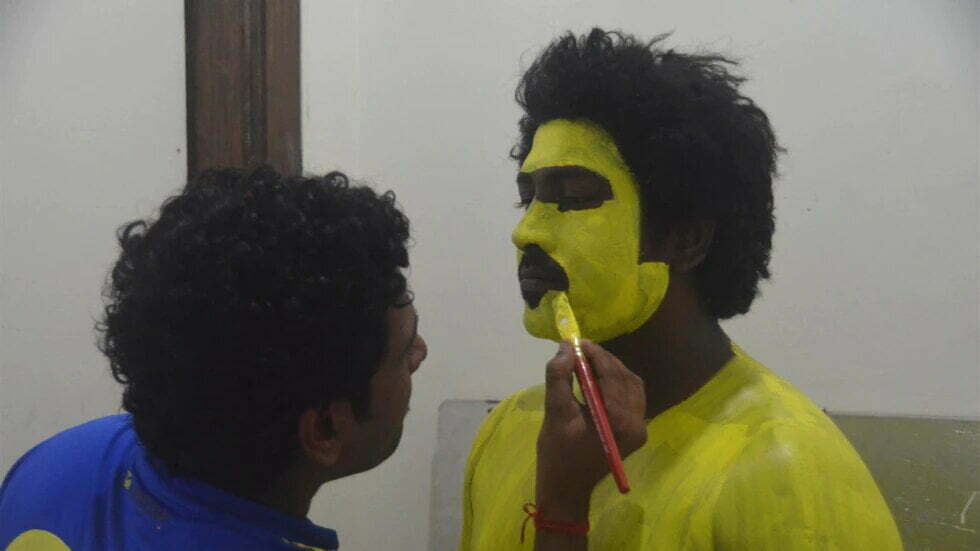 There is no doubt until now that Meet Saravanan Hari is a huge Dhoni fan. It was in 2014 that God had answered his prayers and he met the man himself but coincidently at the Bhubaneshwar airport. While this was just a brief meeting, everything changed soon.

“I prayed to God once again to meet my idol. Finally, I got a call from CSK management and they asked me to come to their event in Bangalore. At first, I was just a bit nervous to meet my hero, but when I saw him up close, I was speechless, I couldn’t even move, and it was like god in front of me – It was the happiest and most memorable day of my life”.

Just like all fans, Saravanan Hari too believes that CSK has surely pushed IPL 2020’s performance at the back of their heads and are now focusing on the new edition. “We all have highs and lows in life and CSK is a team which is known for getting back up and fighting our way through everything. We were not in our best form last year, but the new year has come with new hope. I have faith in the team”.

The IPL 2021, will see its opener clash between defending champions Mumbai Indians (MI) and Royal Challengers Bangalore (RCB) in Chennai behind closed doors. Fans can watch all the action from home on Star Sports Network and Disney+ Hotstar VIP at 7:30 PM.