The function was inaugurated by the hands of these eminent personalities and the Principal Yashasvi Jain with the initiation of lamp lighting. During the lamp lighting blessing of Maa Saraswati was taken so that the school children are blessed with immense knowledge and growth.

After that main program started with the Prayer to Lord Ganesh Ji and seeking his blessings for the entire school. Children of Nursery class started the program with Ganesh Vandana where they danced and evoked the blessings of Ganesh Ji. Later a Singing Vandana was also presented to Ganesh Ji for the eradication of Vighan in the program.

After that, a warm welcome was accorded to the new director Mr. Gaurav Singh, who has joined the board with Director Mrs. Simran Singh, Entrepreneur and visionary. Mr. Singh while delivering his speech emphasized on the highlights of the School Activities around the year and he promised to take this education institution in great heights in years to come, he further said education is the key to success.

The Renaissance 2019 program name was kept as Third Crusader which when explained the plight of Mother Earth. It explained how Earth is the third planet in the Solar System and crusader meaning the savior led to the name Third Crusader. How we all have led to the destruction of Earth and now we need to take constructive actions to rebuild our Earth.

The entire program was shown with the help of Navarasa as the main source of delivering knowledge. The showcased how God made Mother Earth with its eternal beauty, how water kingdom and land kingdom was created, how humans were created when humans started demolition of the Earth how Mother Earth became livid and tried to show God that his Humans were behaving in a disparaging manner and all ready to annihilate nature to the verge of extinction. It was during this time God still kept his faith in Humanity and tried to reason with Mother Earth and bring Humans towards the path of restoration. Later with the destruction shown to us, we see that humans learn lessons and try to mend their ways and work on the restoration of Mother Earth. In the end, mother Earth got placated and asked God to help her to heal herself for future generations.

The entire show led to put light on the difficulties of the Mother Earth and how actions of Humans led to their destruction. In the end, it showed when the message was learned by humans they joined hands to work on it and bring better results for Mother Earth.
The Grand Finale was shown with a message where children and parents both learned that we need to mend Earth with small but bigger impact changes and WE NEED To DO IT NOW!

The vote of thanks was given by Nidhi Srivastava, Admission counselor of the school. 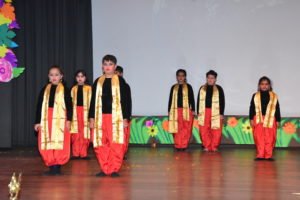 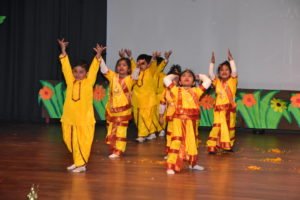