How Baba Ka Dhaba Got Famous?

Baba Ka Dhaba is a 30-year-old food stall in Malviya Nagar, New Delhi, that. Baba Ka Dhaba became an overnight sensation after a video of At the start of the year, a video clip of a smiling Zomato rider went viral across social media platforms. The delivery boy was later identified as Sonu.

In the video, Sonu can be heard saying he works 12 hours per day to earn Rs 350, including incentives. When he is enquired if he gets any food from the company, the rider replies, “Haan, jo order cancel ho Jata hai vo ho jayega humara (Yes, when a customer cancels the order, it is ours).” 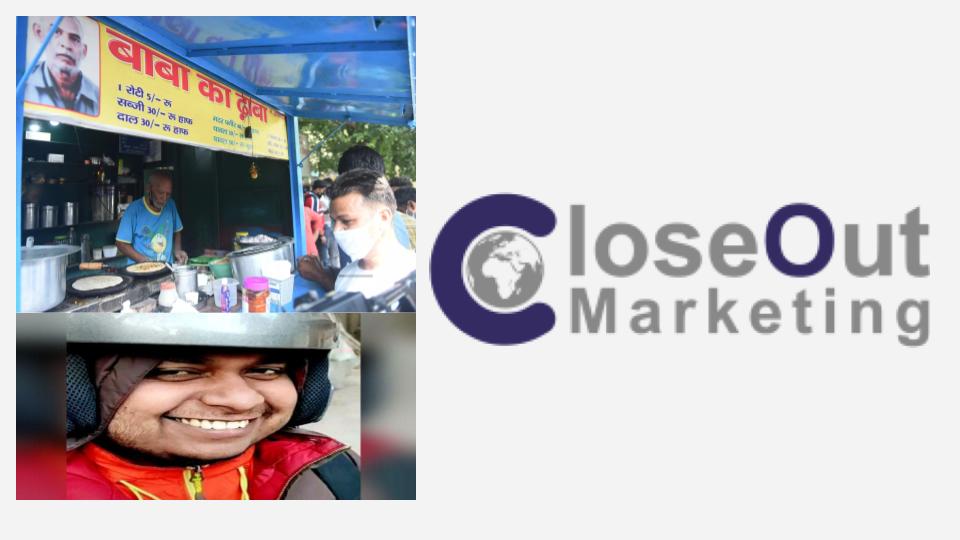 More than his answers, it was Sonu’s smiling face throughout the video that won the hearts of netizens and he turned out to be an overnight star on social media, with leading online pages sharing memes on him.

Do you know who was behind the fame of Zomato Delivery Boy?

Weekly Express Reporter, Shyam Sunder investigated a trail of these viral videos through digital footprints and sharing patterns. Shyam is a digital expert who looks after viral stories and understands their story.

Weekly Express can confirm to its readers that a Gurgaon-based Digital agency named “Closeout Marketing” made the young man famous. However, it was all spontaneous as confirmed by some of the company’s resources.

Speaking to Weekly Express, The Resource said: “Although we are a digital agency and get paid for our marketing services to the clients, it all happened spontaneously in the case of that Zomato Delivery Boy (Sonu). One member of our marketing team casually asked him some questions and made a video of it before sharing it on social media.”

“We are glad Sonu became an online star after that. I am hoping he is enjoying all the limelight he is getting from different quarters, which has consequently increased Zomato’s reach as well.”How Baba Ka Dhaba Got Famous

As if Zomato rider’s fame was any less, “Closeout Marketing” recently played the same role in the rise of an 80-year-old social media star.

“Closeout Marketing” came as a game-changer in Kanta Prasad’s life as the Gurgaon-based digital agency spread his plight through a video, in which the old man with teary eyes said it was becoming increasingly difficult for him to sustain during the COVID-19 times.

As soon as the video went viral, folks from all sectors flocked to his Dhaba to have food. The situation was such that the Dhaba situated on a footpath in Malviya Nagar became overcrowded with customers. His trademark Matar paneer, rice, and roti were also ordered online via Zomato, Swiggy, and other food delivery apps. How Baba Ka Dhaba Got Famous

“This story made us all emotional and at the same time, it made me proud that my team has managed to change the life of an old man, who was struggling badly in these trouble times,” Closeout Marketing General Manager told Weekly Express.

The resource explained the company does not take credit or come in the front as it has some big names involved in the board. CloseOut Marketing is a company that functions as a backbone for very big projects and but does not come out in the media. This may be their strategy or whatever you call it.

When I spoke to the resource, he said the company prefers to be very low-key and earn their money.

I said if the company is so capable, it must advertise and come out and be a very big company, To which the resource replied: the company believes in the quotation of powerful players must always work hard and remain quiet.

After researching and talking to several people in the Marketing Industry, Weekly Express got to know CloseOut is behind many big agencies and has the support of several powerful affiliates.