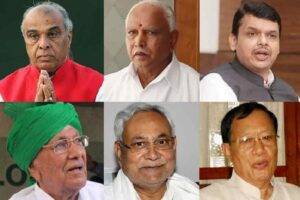 Three days after he was sworn in as the Maharashtra chief minister amid political turmoil in the state, BJP’s Devendra Fadnavis on Tuesday (November 26) submitted his resignation. With his resignation, Fadnavis joined PK Sawant as the shortest-serving chief minister of the state. Before Fadnavis, Sawant, who was the CM in 1963, had the shortest tenure of nine days. India’s shortest-serving Chief Ministers –

However, there were chief ministers of other states who had very short tenures as well.

It can be recalled that during Karnataka government formation last year, BS Yeddyurappa’s tenure as chief minister lasted for just three days as well after BJP failed to get the requisite numbers to show majority ahead of the floor test in the state assembly. Yeddyurappa, after his resignation, joined Jagdambika Pal as the shortest-serving chief minister in the nation.

Pal served as the chief minister of Uttar Pradesh for just one day in 1988.

When Satish Prasad Singh became the chief minister of Bihar in 1968, he was the youngest ever to have led the state. But it lasted only for a week.

Wife of AIADMK founder MG Ramachandran, Janaki was the Tamil Nadu chief minister for only 23 days, from January 7, 1988 to January 30, 1988.

Read – Devendra Fadnavis joins the list of shortest-serving CMs, here are the others