Guru Hargobind Sahib Ji was the sixth of the Ten Gurus of Sikhism. He became Guru on 11th June 1606 following in the footsteps of his father Guru Arjan Sahib Ji.

While the ceremonial rites were being performed by Baba Buddha Ji, Guru Hargobind Ji asked Baba Buddha to adorn him with a sword rather than the Seli of Nanak which had been used previously by the earlier Gurus.

Guru Hargobind then put on not one but two swords; one on his left side and the other on his right. He declared that the two swords signified “Miri” and “Piri”, “Temporal Power” and “Spiritual Power”. One would deliver a powerful blow to the oppressor and the other would protect the innocent.

He told his followers:

“In the Guru’s house, spiritual and temporal powers shall be combined”. “My rosary shall be the sword-belt and on my dastar, I shall wear a kalgi”. (A kalgi an ornament for the dastar, which at the time was worn by Mughal and Hindu rulers.)

Guru Hargobind carried the same light of Guru Nanak, but he added to it the quality of the sword. Guru Hargobind Sahib Ji was also the inventor of the Taus. Guru Ji watched a peacock singing one day and wished to make an instrument to mimic the same sound as the peacock, so the Taus was invented. 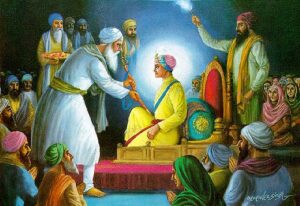 • Introduced martial arts and weapons training and created a standing Military force for the defense of the masses following his father’s martyrdom.

• Carried 2 swords of Miri and Piri.

• Built the Akal Takht in 1608 – which is now one of five Takhts (Seats of Power) of the Sikh Religion.

• Was held in the fort of Gwalior for one year, ostensibly to pray for the recovery of the ill Emperor Jahangir (the Guru had willingly gone to the fort). When Jahangir ordered his release, he refused to leave unless 52 imprisoned Hindu Rajas were freed as well. Cleverly he earned their freedom by turning the Emperor’s own words against him. To mark this occasion, Sikhs celebrate Bandi Chorr Divas to celebrate his release and return to Amritsar.

• The city Hargobindpur, in the Majha region of Punjab, is named after him, which he won over from Mughals after defeating them in a battle. 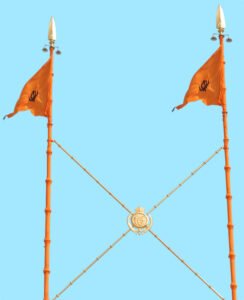 After Jahāngīr’s death (1627) the new Mughal emperor, Shāh Jahān, persecuted the Sikh community in earnest. The Sikhs under Hargobind defeated Shāh Jahān’s armies four times, crushing the myth of Mughal invincibility. To the Sikh ideals of his predecessor, Guru Hargobind thus added another: the right and duty of the Sikhs to defend their faith by the sword if necessary.

1628 Battle of Amritsar – The first battle of Guru Hargobind and the forces of the Mughal army. Shah Jahan worried over the growing influence of the Sikhs and angered by the loss of a valued Hawk seeks to teach Guru Hargobind a lesson.

1629 Battle Of Hargobindpur – Guru Hargobind and the creation of a town over Ruhela, Revenge by Muslims over the death of Bhagavan Das.

1631 Battle Of Gurusar – Guru Hargobind’s horses were snatched by the Mughals and recovered by Gursikh, Bhai Bidhi Chand

1634 Battle Of Kiratpur – Guru Hargobind and the final skirmish fought between the rulers of Ropar.