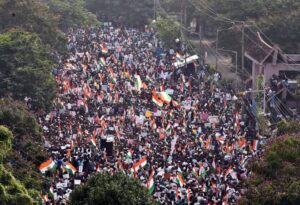 Tens of thousands of people participated in the biggest ever protest against CAA, NRC and NPR in Hyderabad on Saturday (January 4).

The ‘Million March’ drew huge crowds from the twin cities of Hyderabad and Secunderabad and surrounding districts. The three-hour long protest passed off peacefully.

Roads around Indira Park in the heart of the city were packed with men, women and children carrying Indian flags, banners and placards, raising slogans against the Narendra Modi-led government.

The protest against CAA, NRC and NRP was organised by Telangana and Andhra Pradesh Joint Action Committee (JAC). 40 Muslim and Dalit organisations brought traffic to a halt on the main roads at Indira Park and Hussain Sagar lake, which connect the twin cities.

Citizens from various walks of life joined hands to participate in the march, so far the biggest protest against CAA in Hyderabad.

Shops and business establishments were closed in parts of Hyderabad as businessmen and traders turned out to participate in the march. Several educational institutions had also declared a holiday.

The participants were raising slogans like ‘Inquilab zindabad’, ‘Tanashahi nahi chalegi’ and ‘we reject NRC’.

They were carrying banners and placards with slogans like “We will die but not accept CAA, NRC and NPR” and “United against hate”.

“The real issues are economy, education and health, and not Hindu-Muslim, Pakistan and NRC,” read a banner.

The protesters demanded Telangana Chief Minister K. Chandrashekhar Rao to announce that NPR will not be carried out in the state. The organisers had invited Rao to lead the march.

The protest was originally planned last week, but the police had denied permission. The JAC had approached the high court, which asked the police to consider fresh application by the organisers.

The protesters, many of them women, gathered at the NTR Stadium and Dharna Chowk in the afternoon. They recited the national anthem and also offered ‘namaz’.

The protesters holding the Tricolour reached in four wheelers, auto rickshaws and motorbikes while many also came to the venue walking.

The march was a big success despite no mainstream political party being part of it. Most of the constituents of JAC were smaller socio-religious groups.

However, it looked like the citizens came out irrespective of their political affiliations to speak out in one voice.

The All India Majlis-e-Ittehadul Muslimeen (AIMIM), a major political force in the city, was not part of the protest. AIMIM, led by Hyderabad MP Asaduddin Owaisi, had approached the police seeking permission for a march under the banner of United Muslim Action Committee on January 4 or 5. However, the police denied permission for the same.

JAC convenor Mushtaq Malik said the ‘Million March’ was successful despite the attempts by some elements to scuttle it by circulating rumours on social media since Friday night.

“CAA is discriminatory against Muslims. We will not accept it,” said Syed Sajid, a student participating in the march

“CAA is not the only issue. The government is going to start NPR which is nothing but the first step towards NRC,” said Zohra Begum, a housewife, holding the national flag.

“Our ancestors decided to remain in India on a call given by Maulana Abul Kalam Azad. This is our country. We were born here and will die here,” said another protester.