Three public buses and a fire tender were set ablaze in New Friends’ Colony during protests against the Citizenship Amendment Act. Jamia Millia has repeatedly denied its involvement in the arson and violence, claiming it was the work of “outsiders”.

1) Jamia dissociates itself from violence

#WatchVideo | Explosions inside and outside the campus of Jamia Millia Islamia University.https://t.co/DjTq230EuP pic.twitter.com/ksqzZL7Yb7

Mathura Road opposite New Friends Colony both carriageways have been blocked by demonstrator. 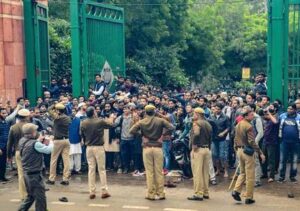 I strongly condemn the behaviour of the Delhi Police today. Students of Jamia Milia University were victims of police brutality. Women were equally harassed. pic.twitter.com/dzqFhNTMgi