Delhi, the city that has a stereotype of running high on politics, power and Punjabi music, also appears to be running high on weed. According to a new study, the national capital of India is the third largest consumer of cannabis in the world, having consumed 38.26 metric tonnes or 38,260 kgs. Delhi Weed consumption is one of the biggest.

The study, ‘2018 Cannabis Price Index’ conducted by ABCD, which is a data-driven media campaign outlet, has released new data which reveals the number of marijuana head and growshops in 120 cities around the world.

The study looked at the 2018 Cannabis Price Index released earlier, and reveals which locations around the world are ready to embrace cannabis legalization.

In the study, Delhi ranks in the top 10 cities with the highest and consumption of cannabis, following New York (USA) and Karachi (Pakistan). Mumbai also makes it to the top ten, ranking at six, with an average of 32.38 tonnes, or 32,380 kgs.

While the consumption of cannabis in Delhi is mentioned as ‘partially’ legal, in India, the state of legality of cannabis in India largely remains confusing.

‘Cannabis’ in India can be defined under two board forms, hemp – and cannabis plant.

While cannabis plant can means any plant of the genus cannabis, hemp also known as ‘charas,’ “the separated resin, in whatever form, crude or purified, obtained from the cannabis plant and also includes concentrated preparation and resin known as hashish oil or liquid hashish, ganja, or the flowering fruit tops, and any mixture, with or without any neutral material, of any of the above forms of cannabis or any drink prepared therefrom,” is regulated under the law in India, under the Narcotic Drugs and Pyschotropic Substances Act, 1985. 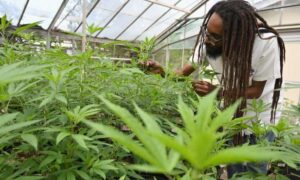 ‘Bhaang,’ the popular drink made during Holi, is left out of the definition of “cannabis,” as it “opposed its intolerance to the social and religious customs of India.”

Essentially, NDPS banned the production and sale of cannabis resin and flowers, but permitted the use of the leaves and seeds, allowing the states to regulate the latter.

What this implies is that while ‘charas’ and ‘ganja’ production is illegal, but seeds and leaves, which constitute ‘bhaang’ is legal.

The study also shows that Delhi is in the top 10 cities for the least expensive cities in the world, putting the cost at just 4.38 USD, or Rs 315 per gram. Delhi Weed consumption –

Biggest Pot-Smoking States of the World

Surprisingly, India doesn’t show up in countries where marijuana would be profitable if it was taxed.

Amsterdam in the Netherlands, which would be on any pot-lovers bucket list, is ranked 56th with an annual consumption of 3.6 tons, which is just a 10th of Delhi.